Within, a supernatural thriller set in an otherwise unsuspecting town, was shot in just 20 days in and around Los Angeles. In her feature film debut, Director Hanelle Culpepper brings to life a harrowing story by Rebecca Sonnenshine about Rachel, a young girl who realizes she can see evil spirits. The opening scene of the film captures Rachel reluctantly entering an otherwise inviting Italian deli. In a series of unsettling events that follow, Rachel becomes witness to the disturbing death of her mother. Though Rachel and her father retreat to small town USA for a fresh start, Rachel finds she cannot escape the visions she experienced that dreadful day. 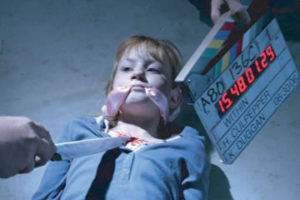 To prepare for the film, Culpepper conducted extensive research. She even consulted a shamanic master who warned her to beware of bad spirits lingering around the set and attempting to enter her life while she worked on the film. “It did freak me out a little bit,” Culpepper said. And indeed, the production proved to have its more challenging moments. Shooting a movie starring kids in just 20 days was problematic in itself due to legal restrictions for child actors. But producers encountered everything from injured cast members to finding the perfect balance between budget and resources for filming.

Before arriving on set, actress Janet Rotblatt (Mrs. Stanton) suffered a broken wrist. At another point during filming, it was unclear whether fluctuating production resources would even allow for the crucial fire scene to be shot near the end of the film!

However, for as many obstacles that were overcome on set, there were also plenty of laughs supplied by the young cast. Mia Ford (Rachel) and Sammi Hanratty (Michelle Lowe) were best of friends from the first audition and quickly became known as daft pranksters, often targeting producer Jerry Jacobs.